Which F word do you choose – Fear or Faith?

This is a question that my teacher Mona often asked me, probably because I was spending lots of time in fear. Before I knew better, it pretty much ran my life. And, truth be told, it pretty much runs the world we live in. Fear mongering has become an acceptable, expectable way of being. It’s what advertisers and politicians use to get people to take action. It’s what happens when we start beating ourselves up after reading an acquaintance’s Facebook post whose life is seemingly better than ours.

Over the last week, the internet and conversations have been riddled with fear, at least for those of us who were terrified by the notion of Donald Trump becoming the 45th President of the United States. Well, it happened. So, what are we going to do about it now?

No. You are not moving to Canada.

My hope is that you will choose faith over fear.

Donald Trump might just be the greatest teacher of the 21st Century. We are in the midst of a paradigm shift and Donald Trump is at the center of it. As I shared in my post Thank You Donald Trump, his racist comments and sexist acts provided the opportunity for a conversation. He allowed us to shine the light on the truth, the darkness that is tearing our society apart from the inside out.

Maybe if Hillary was elected, we would have quickly forgotten about the mudslinging that was the 2016 Presidential Campaign. Maybe we would have forgotten about how shocked and upset and angry and depressed we were that Donald Trump had the biggest stage in the world to show off his improprieties. Maybe we need more of it to remember what we stand for and believe in and to inspire us to never back down on playing big and speaking our truths and saying no when it’s unacceptable.

This is where faith comes in. We have to know that there is a bigger plan and it might 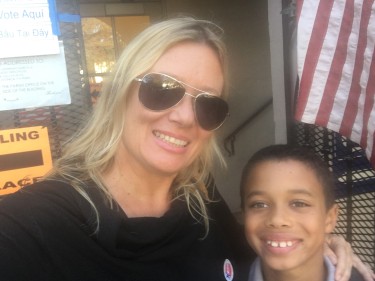 possibly be better than Hillary being elected. Yes. It kills me to say that, brings tears to my eyes because when I voted for her on November 8th with my son at my side I was so filled with hope and possibility. Not until that moment did I really believe that it was possible that a woman could run our country.

Growing up in Pittsburgh, Pennsylvania in the 1970s, I never once thought that I could be the President of the United States. That was a job for an old man, or so it seemed to me as a little girl. I’m so proud of Hillary for taking it on and sacrificing all that she did to change this notion for women and girls around the world.

Yes, she’s not perfect. She did some things she shouldn’t have, but show me one politician, or better yet, one person who is perfect.

I’ve heard and read many stories this last week about people being violated in the name of Trump. I’ve also seen and read many stories about peaceful protests and other activities where folks all over the country are empowering themselves by using their voice, joining in community and standing up for what is fair and just.

We must move forward in faith on both sides of the aisle. After all, these are the cards we’ve been dealt.

Go out into the world and be kind and thoughtful and generous with your time, energy and actions. Treat everyone in a way they you wish to be treated. Model for your children how to do this. And, never give up on equality and justice for all.

About Kristen Kosinski
As a coach and consultant, Kristen partners with women empowering them to manifest their dreams. The sum total of all of her experience has brought Kristen to this important work. Women’s empowerment does not only benefit women, it betters all of society. Her daily practice is to make a positive impact in whatever way she can and not to beat herself up when she falls short. Kristen and her 8-year-old son live in Santa Monica, California.